One of the small downsides of using a cover designer instead of getting dedicated cover art created is that you’re limited by what’s available in the stock-images catalog your designer uses. Don’t get me wrong: Glendon at Streetlight Graphics is a wizard, and he transforms those stock images into things that their own mothers wouldn’t recognize (you know, if stock images had mothers. Work with me here).

For the first three books we were able to find shots that worked, but for Book 4, we kept coming up empty because there wasn’t a pose that worked for what I was looking for. So I thought, “Hey, why don’t I just get some shots of my own and send them along?”

I am very lucky in this regard. In the first place, I have a whole collection of very creative friends, and one of them is an award-winning amateur photographer. I used to work with him…holy cats…almost 20 years ago, and we’re Facebook friends. So I asked him if he’d be willing to take a stab at it. He not only agreed to do it, but he said all I had to do was buy him dinner afterward. And, on top of that, he suggested a studio we could use.

I’m also lucky that I have another friend, a longtime fellow player in our 20-year-old Shadowrun campaign, who has a build almost exactly like Stone’s: tall, thin, and athletic. So I asked him if he’d be willing to play body-model and he agreed. He said he thought it sounded like fun. He was even a good sport about the fact that we’d probably need to cut his head off and substitute the stock-photo guy.

So I secured the studio, found a perfect black wool overcoat on Ebay in Steve’s size along with some cheap (really cheap, as it happened) Doc Martens in size “boat,” and yesterday we set off along with Steve’s wife Miranda and my husband Dan.

The shoot went great! We got over 90 photos in different poses, including some cool props like a cane and a magic book, and I think they’ll give Glendon a lot to work with, not just for Book 4 but for several more books to come.

Afterward, we all went out and ate ourselves into meat comas at a Brazilian steakhouse. All in all, everything went about as well as I could have expected it to go, and everybody had fun.

Can’t wait to see how the shots end up looking on the covers! Here are some samples (taken with my iPhone–these aren’t the actual shots from the session, since they’re all high res and huge). 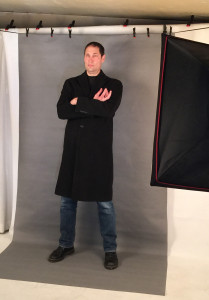 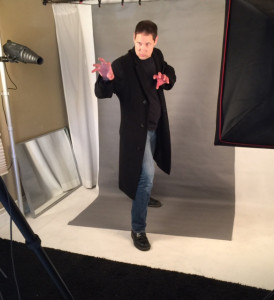 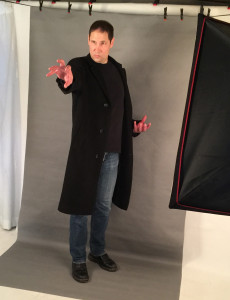 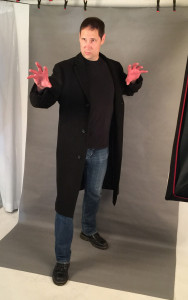