A Vulcan and a nerdy kid: Some thoughts about Leonard Nimoy

I’ve been thinking a lot about Leonard Nimoy since hearing about his passing yesterday. It was so good to see the outpouring of love and affection from the geek community for this icon of a man—Mr. Spock’s passing should be, and was, sort of a worldwide day of nerd mourning.

I never met Leonard Nimoy, but like many nerds my age, I always felt a kinship with him. More than that, though, I think it’s safe to say that he is indirectly responsible for a lot of the directions my life took.

I discovered Star Trek in 1977. It was in syndication then on one of the Los Angeles off-channels (KCOP 13, I think), and it was always “that show my mom watched.” My mom and I rarely saw eye to eye on entertainment choices, so I (in the way young teenagers do) actively avoided watching it even as she raved about how good it was.

Then one summer night I was bored enough that I sat down and watched an episode with her. I don’t remember which one it was, though I’m pretty sure it was “Amok Time.” And from that episode, I suddenly got it. I got what my mom saw in this show, and especially in this tall guy with dark hair and pointed ears, who was always so calm and emotionless—except when he wasn’t. Except when he was fighting in an arena, or grinning his head off when he discovered that his friend Captain Kirk wasn’t dead. Here was just the kind of character I admired: strong, tough, capable, highly intelligent, and an outsider. And pretty easy on the eyes, too!

From that point on I was hooked. I watched all the episodes, and memorized the ones that had the best Spock bits in them. I recorded them on my little tape recorder because VCRs weren’t really a thing yet (or at least not one that most families could afford, and the tapes cost a fortune). I spent all my allowance money on Star Trek novels (the Blish novelizations of the episodes, the Alan Dean Foster novelizations of the animated series, which I wanted desperately to see), Spock Must Die, Spock Messiah!, The Price of the Phoenix (still one of my favorite Star Trek novels), and more. When I ran out of allowance money, I begged my parents to buy me more books. I drew pictures. I wrote fanfiction. From junior high through most of high school, I ate, slept, and lived Star Trek. And it was almost all because of Mr. Spock.

Not your typical Star Trek novel

I never attended a convention, but I discovered Star Trek Lives, written by Joan Winston, Jacqueline Lichtenberg, and Sondra Marshak. From reading that, I discovered that Jacqueline had written a book called House of Zeor, so I sought that out. I drove my friends crazy with my Trek and Zeor talk. And I wrote. And wrote. And wrote. And when I ran into difficult situations, or was scared or angry or hurt, I’d ask myself: “What would Spock do in this situation?” And it helped. It really did.

I took a break through most of college, discovering gaming (again, indirectly as a result of Star Trek—that’s where my nerd roots lie), which had a massive impact on my later life in the form of friendships, immersion in the gaming industry, and more writing. I even came this close to being able to take James Doohan out to dinner in college (he came to do a talk, and our club was responsible for making sure he had dinner—but I was a new member, so that honor went to someone else, who later admitted to not knowing what to talk about with him! His talk was wonderful, though!)

Then came the internet, and suddenly these people I admired as a child were right there. They had a presence on the web. Some of them even actually replied to me when I wrote to them. I met Jacqueline Lichtenberg and Jean Lorrah, two old-line Trek superfans who were around when the whole thing started. I helped out with the original Sime~Gen website (the series that started with House of Zeor). I’m Facebook friends with David Gerrold, who wrote one of my favorite Trek episodes, “The Trouble with Tribbles.” I chuckle at George Takei’s postings every day. It’s unreal. If I’d gone back in time (in the TARDIS—I’m more of a Whovian than a Trekker these days) and told my 13-year-old self how things would turn out in the future, she’d have laughed. And hoped I was right.

And it all started with a night of boredom and a pointy-eared, dark-haired, green-blooded alien who captured my imagination and spoke to something deep inside a nerdy kid who always felt like she was on the outside looking in at life and who hoped that some day the key would show itself and she’d “get it.”

I never did get it—but I did something better. I realized I didn’t have to. Because there are a lot of great people out here with me, and somewhere along the line we all realized that we don’t have to go “in there.” Out here is just fine, thanks.

Thank you, Mr. Nimoy. For all us nerdy kids out there, you made the world a better place. 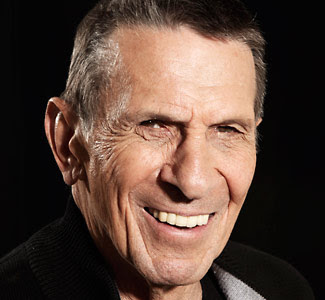